The memory view provides insights into details of the application’s memory allocation and tools to detect and debug specific issues.

For information on how to locate DevTools screens in different IDEs, check out the DevTools overview.

To better understand the insights found on this page, the first section explains how Dart manages memory. If you already understand Dart’s memory management, you can skip to the Memory view guide.

Reasons to use the memory view

Use the memory view for preemptive memory optimization or when your application experiences one of the following conditions:

Dart objects created using a class constructor (for example, by using MyClass()) live in a portion of memory called the heap. The memory in the heap is managed by the Dart VM (virtual machine). The Dart VM allocates memory for the object at the moment of the object creation, and releases (or deallocates) the memory when the object is no longer used (see Dart garbage collection).

Every Dart application creates a root object that references, directly or indirectly, all other objects the application allocates.

If, at some moment of the application run, the root object stops referencing an allocated object, the object becomes unreachable, which is a signal for the garbage collector (GC) to deallocate the object’s memory.

The following example illustrates the concepts:

The retained size of the root object includes all reachable Dart objects.

In the following example, the size of myHugeInstance isn’t part of the parent’s or child’s shallow sizes, but is part of their retained sizes:

In DevTools calculations, if an object has more than one retaining path, its size is assigned as retained only to the members of the shortest retaining path.

In this example the object x has two retaining paths:

Only members of the shortest path (d and e) will include x into their retaining size.

Some parts of an object (for example, graphics) might be stored outside of Dart heap, in native device memory.

You can observe an object’s Dart heap, external, and total memory allocation breakdown on the Profile tab:

Garbage collector cannot prevent all types of memory leaks, and developers still need to watch objects to have leak-free lifecycle.

While the garbage collector takes care of all unreachable objects, it’s the responsibility of the application to ensure that unneeded objects are no longer reachable (referenced from the root).

So, if non needed objects are left referenced (in a global or static variable, or as a field of a long-living object), the garbage collector can’t recognize them, the memory allocation grows progressively, and the app eventually crashes with an out-of-memory error.

One hard-to-catch leak pattern relates to using closures. In the following code, a reference to the designed-to-be short-living myHugeObject is implicitly stored in the closure context and passed to setHandler. As a result, myHugeObject won’t be garbage collected as long as handler is reachable.

An example of a large, short-living object that might squeeze into a long-living area and thus cause leaks, is the context parameter passed to Flutter’s build method.

The following code is leak prone, as useHandler might store the handler in a long-living area:

How to fix leak prone code?

The following code is not leak prone, because:

In general, use the following rule for a BuildContext: if the closure doesn’t outlive the widget, it’s ok to pass the context to the closure.

Stateful widgets require extra attention. They consist of two classes: the widget and the widget state, where the widget is short living, and the state is long living. The build context, owned by the widget, should never be referenced from the state’s fields, as the state won’t be garbage collected together with the widget, and can significantly outlive it.

In a memory leak, an application progressively uses memory, for example, by repeatedly creating a listener, but not disposing it.

Memory bloat uses more memory than is necessary for optimal performance, for example, by using overly large images or keeping streams open through their lifetime.

Both leaks and bloats, when large, cause an application to crash with an out-of-memory error. However, leaks are more likely to cause memory issues, because even a small leak, if repeated many times, leads to a crash.

The DevTools memory view helps you investigate memory allocations (both in the heap and external), memory leaks, memory bloat, and more. The view has the following features:

A timeseries graph visualizes the state of Flutter memory at successive intervals of time. Each data point on the chart corresponds to the timestamp (x-axis) of measured quantities (y-axis) of the heap. For example, usage, capacity, external, garbage collection, and resident set size are captured.

The memory overview chart is a timeseries graph of collected memory statistics. It visually presents the state of the Dart or Flutter heap and Dart’s or Flutter’s native memory over time.

The chart’s x-axis is a timeline of events (timeseries). The data plotted in the y-axis all has a timestamp of when the data was collected. In other words, it shows the polled state (capacity, used, external, RSS (resident set size), and GC (garbage collection)) of the memory every 500 ms. This helps provide a live appearance on the state of the memory as the application is running.

Clicking the Legend button displays the collected measurements, symbols, and colors used to display the data.

The Memory Size Scale y-axis automatically adjusts to the range of data collected in the current visible chart range.

The quantities plotted on the y-axis are as follows:

Dart/Flutter Heap
Objects (Dart and Flutter objects) in the heap.
Dart/Flutter Native
Memory that isn’t in the Dart/Flutter heap but is still part of the total memory footprint. Objects in this memory would be native objects (for example, from reading a file into memory, or a decoded image). The native objects are exposed to the Dart VM from the native OS (such as Android, Linux, Windows, iOS) using a Dart embedder. The embedder creates a Dart wrapper with a finalizer, allowing Dart code to communicate with these native resources. Flutter has an embedder for Android and iOS. For more information, see Command-line and server apps, Dart on the server with Dart Frog, Custom Flutter Engine Embedders, Dart web server deployment with Heroku.
Timeline
The timestamps of all collected memory statistics and events at a particular point in time (timestamp).
Raster Cache
The size of the Flutter engine’s raster cache layer(s) or picture(s), while performing the final rendering after compositing. For more information, see the Flutter architectural overview and DevTools Performance view.
Allocated
The current capacity of the heap is typically slightly larger than the total size of all heap objects.
RSS - Resident Set Size
The resident set size displays the amount of memory for a process. It doesn’t include memory that is swapped out. It includes memory from shared libraries that are loaded, as well as all stack and heap memory. For more information, see Dart VM internals.

Use the Profile tab to see current memory allocation by class and memory type. For a deeper analysis in Google Sheets or other tools, download the data in CSV format. Toggle Refresh on GC, to see allocation in real time. 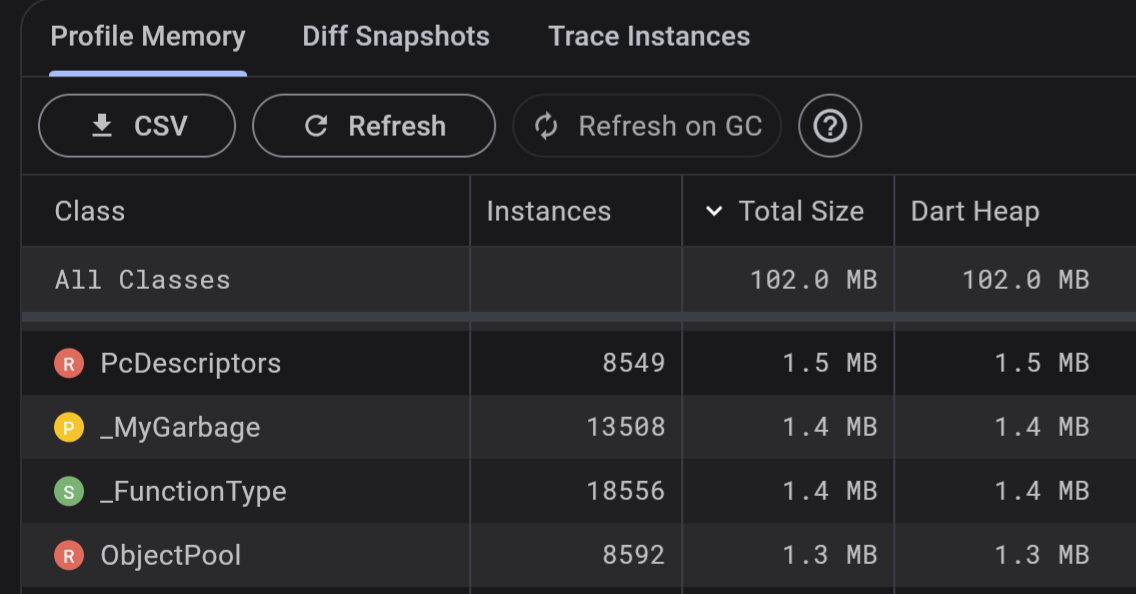 Use the Diff tab to investigate a feature’s memory management. Follow the guidance on the tab to take snapshots before and after interaction with the application, and diff the snapshots: 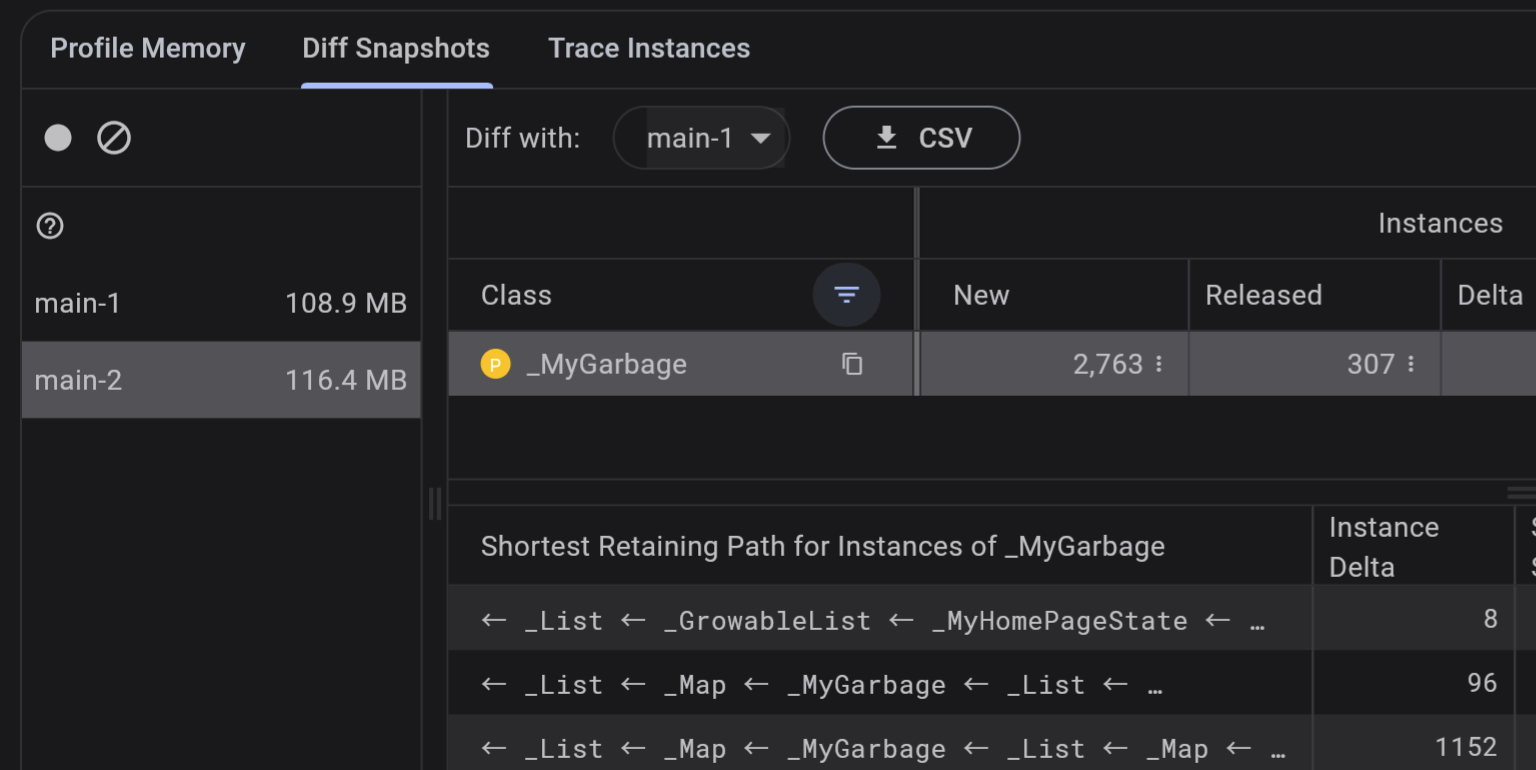 Tap the Filter classes and packages button, to narrow the data:

For a deeper analysis in Google Sheets or other tools, download the data in CSV format.

Use the Trace tab to investigate what methods allocate memory for a set of classes during feature execution:

Bottom up vs call tree view

Switch between bottom-up and call tree views depending on specifics of your tasks.

The call tree view shows the method allocations for each instance. The view is a top-down representation of the call stack, meaning that a method can be expanded to show its callees.

The bottom-up view shows the list of different call stacks that have allocated the instances.

To learn how to monitor an app’s memory usage and detect memory leaks using DevTools, check out a guided Memory View tutorial.