You’ve probably seen hero animations many times. For example, a screen displays a list of thumbnails representing items for sale. Selecting an item flies it to a new screen, containing more details and a “Buy” button. Flying an image from one screen to another is called a hero animation in Flutter, though the same motion is sometimes referred to as a shared element transition.

You might want to watch this one-minute video introducing the Hero widget:

Examples: This guide provides examples of each hero animation style at the following links.

New to Flutter? This page assumes you know how to create a layout using Flutter’s widgets. For more information, see Building Layouts in Flutter.

Terminology: A Route describes a page or screen in a Flutter app.

You can create this animation in Flutter with Hero widgets. As the hero animates from the source to the destination route, the destination route (minus the hero) fades into view. Typically, heroes are small parts of the UI, like images, that both routes have in common. From the user’s perspective the hero “flies” between the routes. This guide shows how to create the following hero animations:

A standard hero animation flies the hero from one route to a new route, usually landing at a different location and with a different size.

In radial hero animation, as the hero flies between routes its shape appears to change from circular to rectangular.

The following video (recorded at slow speed), shows an example of a radial hero animation. At the start, a row of three circular images appears at the bottom of the route. Tapping any of the circular images flies that image to a new route that displays it with a square shape. Tapping the square image flies the hero back to the original route, displayed with a circular shape.

Basic structure of a hero animation

Terminology: If the concept of tweens or tweening is new to you, see the Animations in Flutter tutorial.

Flutter calculates the tween that animates the Hero’s bounds from the starting point to the endpoint (interpolating size and position), and performs the animation in an overlay.

The next section describes Flutter’s process in greater detail.

The following describes how Flutter performs the transition from one route to another. 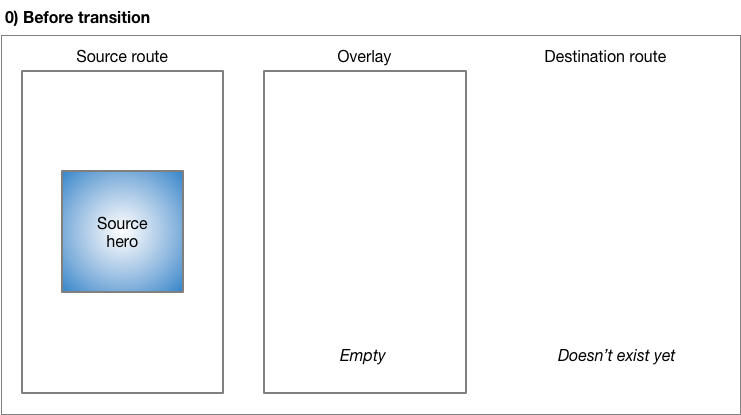 Before transition, the source hero waits in the source route’s widget tree. The destination route does not yet exist, and the overlay is empty. 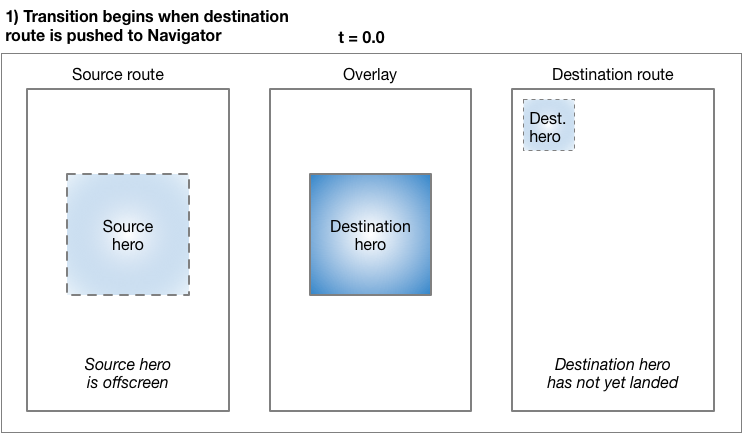 Pushing a route to the Navigator triggers the animation. At t=0.0, Flutter does the following: 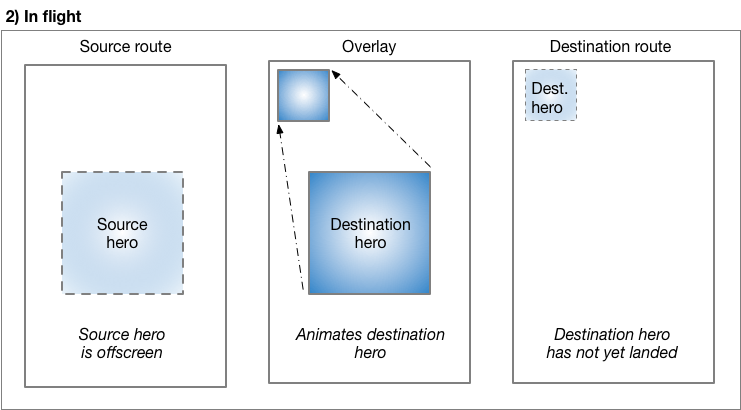 As the hero flies, its rectangular bounds are animated using Tween<Rect>, specified in Hero’s createRectTween property. By default, Flutter uses an instance of MaterialRectArcTween, which animates the rectangle’s opposing corners along a curved path. (See Radial hero animations for an example that uses a different Tween animation.) 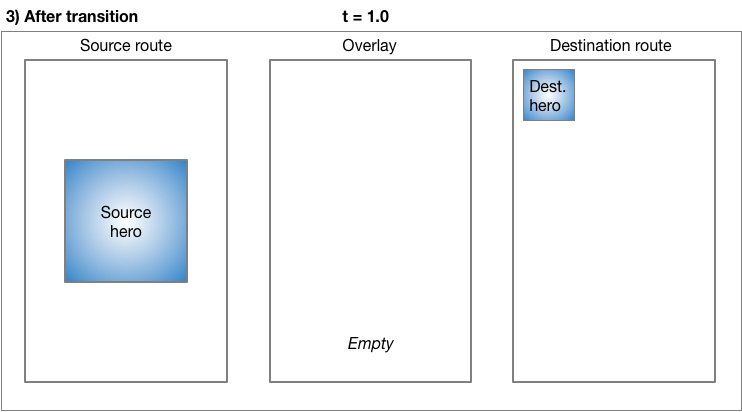 When the flight completes:

Popping the route performs the same process, animating the hero back to its size and location in the source route.

The examples in this guide use the following classes to implement hero animations:

Hero
The widget that flies from the source to the destination route. Define one Hero for the source route and another for the destination route, and assign each the same tag. Flutter animates pairs of heroes with matching tags.
Inkwell
Specifies what happens when tapping the hero. The InkWell’s onTap() method builds the new route and pushes it to the Navigator’s stack.
Navigator
The Navigator manages a stack of routes. Pushing a route on or popping a route from the Navigator’s stack triggers the animation.
Route
Specifies a screen or page. Most apps, beyond the most basic, have multiple routes.

Each of the following examples demonstrates flying an image from one route to another. This guide describes the first example.

Flying an image from one route to another is easy to implement using Flutter’s hero widget. When using MaterialPageRoute to specify the new route, the image flies along a curved path, as described by the Material Design motion spec.

Create a new Flutter example and update it using the files from the hero_animation.

To run the example:

The custom PhotoHero class maintains the hero, and its size, image, and behavior when tapped. The PhotoHero builds the following widget tree: 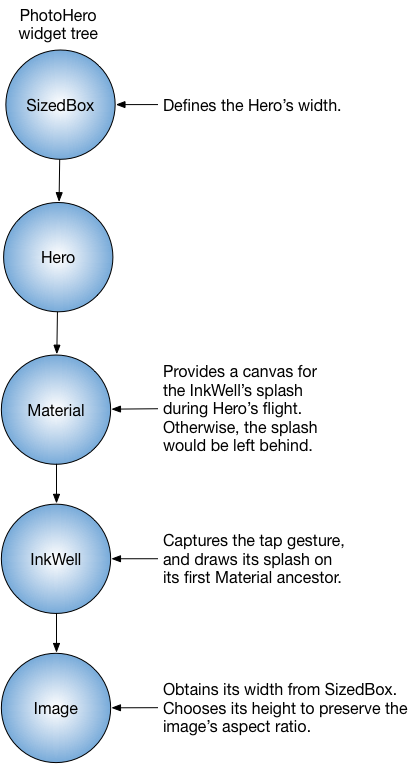 The HeroAnimation class creates the source and destination PhotoHeroes, and sets up the transition.

Flying a hero from one route to another as it transforms from a circular shape to a rectangular shape is a slick effect that you can implement using Hero widgets. To accomplish this, the code animates the intersection of two clip shapes: a circle and a square. Throughout the animation, the circle clip (and the image) scales from minRadius to maxRadius, while the square clip maintains constant size. At the same time, the image flies from its position in the source route to its position in the destination route. For visual examples of this transition, see Radial transformation in the Material motion spec.

This animation might seem complex (and it is), but you can customize the provided example to your needs. The heavy lifting is done for you.

Each of the following examples demonstrates a radial hero animation. This guide describes the first example.

Pro tip: The radial hero animation involves intersecting a round shape with a square shape. This can be hard to see, even when slowing the animation with timeDilation, so you might consider enabling the debugPaintSizeEnabled flag during development. 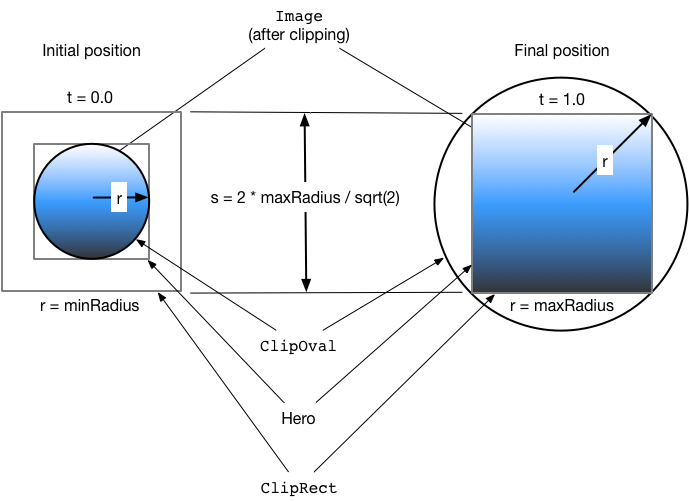 Create a new Flutter example and update it using the files from the radial_hero_animation GitHub directory.

To run the example:

The Photo class builds the widget tree that holds the image:

The RadialExpansion widget, the core of the demo, builds the widget tree that clips the image during the transition. The clipped shape results from the intersection of a circular clip (that grows during flight), with a rectangular clip (that remains a constant size throughout).

To do this, it builds the following widget tree: 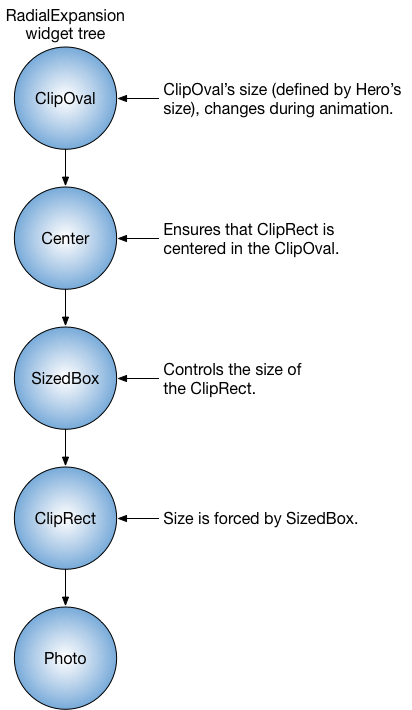