Well-designed animations make a UI feel more intuitive, contribute to the slick look and feel of a polished app, and improve the user experience. Flutter’s animation support makes it easy to implement a variety of animation types. Many widgets, especially Material widgets, come with the standard motion effects defined in their design spec, but it’s also possible to customize these effects.

There are different approaches you can take when creating animations in Flutter. Which approach is right for you? To help you decide, check out the video, How to choose which Flutter Animation Widget is right for you? (Also published as a companion article.)

(To dive deeper into the decision process, watch the Animations in Flutter done right video, presented at Flutter Europe.)

As shown in the video, the following decision tree helps you decide what approach to use when implementing a Flutter animation: 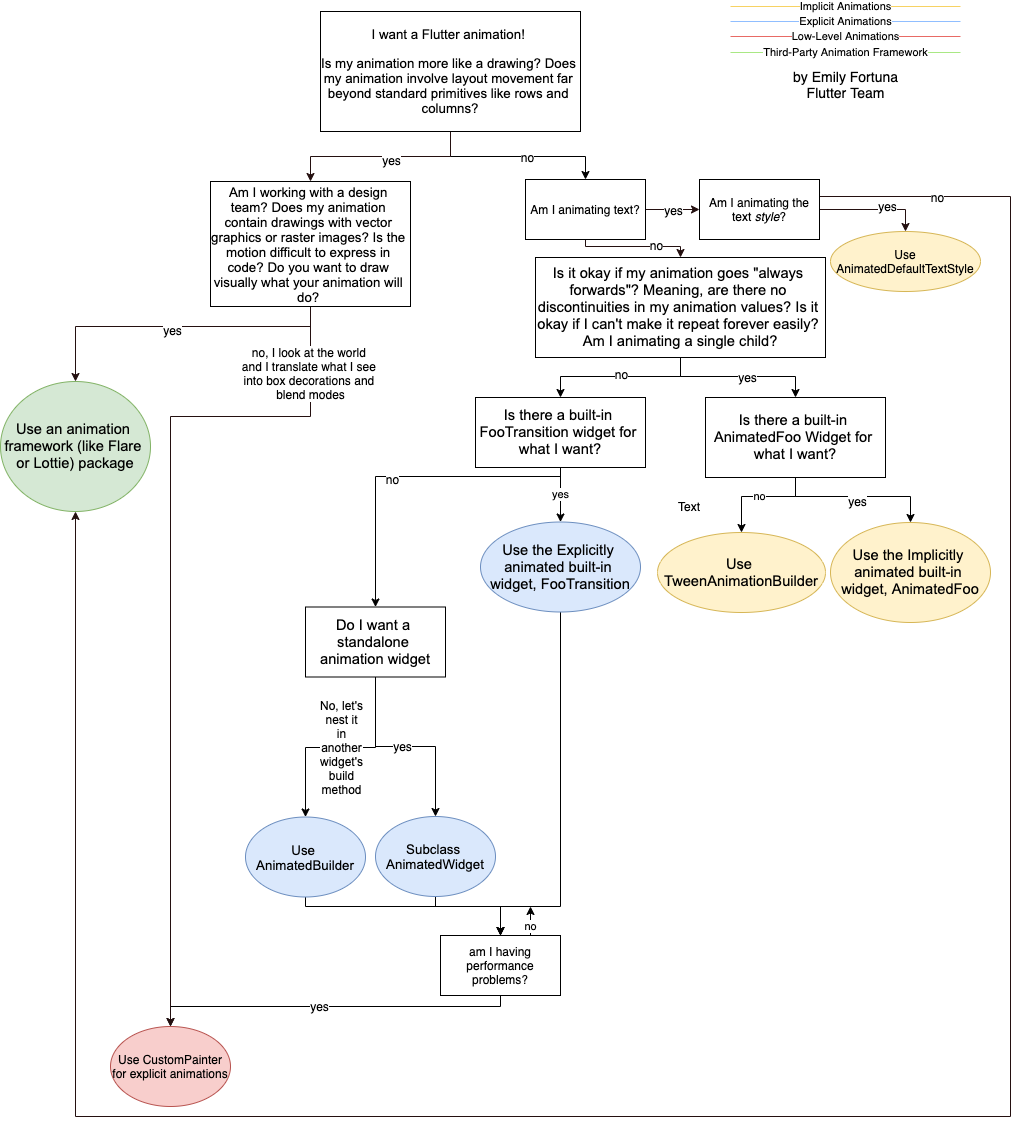 For a deeper understanding of just how animations work in Flutter, watch Animation deep dive. (Also published as a companion article.)

The following resources are a good place to start learning the Flutter animation framework. Each of these documents shows how to write animation code.

Generally, animations are either tween- or physics-based. The following sections explain what these terms mean, and point you to resources where you can learn more.

Short for in-betweening. In a tween animation, the beginning and ending points are defined, as well as a timeline, and a curve that defines the timing and speed of the transition. The framework calculates how to transition from the beginning point to the end point.

The documents listed above, such as the Animations tutorial, are not specifically about tweening, but they use tweens in their examples.

If you are using Material widgets, you might check out the animations package available on pub.dev. This package contains pre-built animations for the following commonly used patterns: Container transforms, shared axis transitions, fade through transitions, and fade transitions.

This pattern involves animating the addition or removal of elements from a list or grid.

In this pattern, the user selects an element—often an image—from the page, and the UI animates the selected element to a new page with more detail. In Flutter, you can easily implement shared element transitions between routes (pages) using the Hero widget.

Animations that are broken into smaller motions, where some of the motion is delayed. The smaller animations might be sequential, or might partially or completely overlap.

Learn more about Flutter animations at the following links: