How to perform a hot reload

To hot reload a Flutter app:

After a successful hot reload operation, you’ll see a message in the console similar to:

The app updates to reflect your change, and the current state of the app is preserved. Your app continues to execute from where it was prior to run the hot reload command. The code updates and execution continues.

What is the difference between hot reload, hot restart, and full restart? 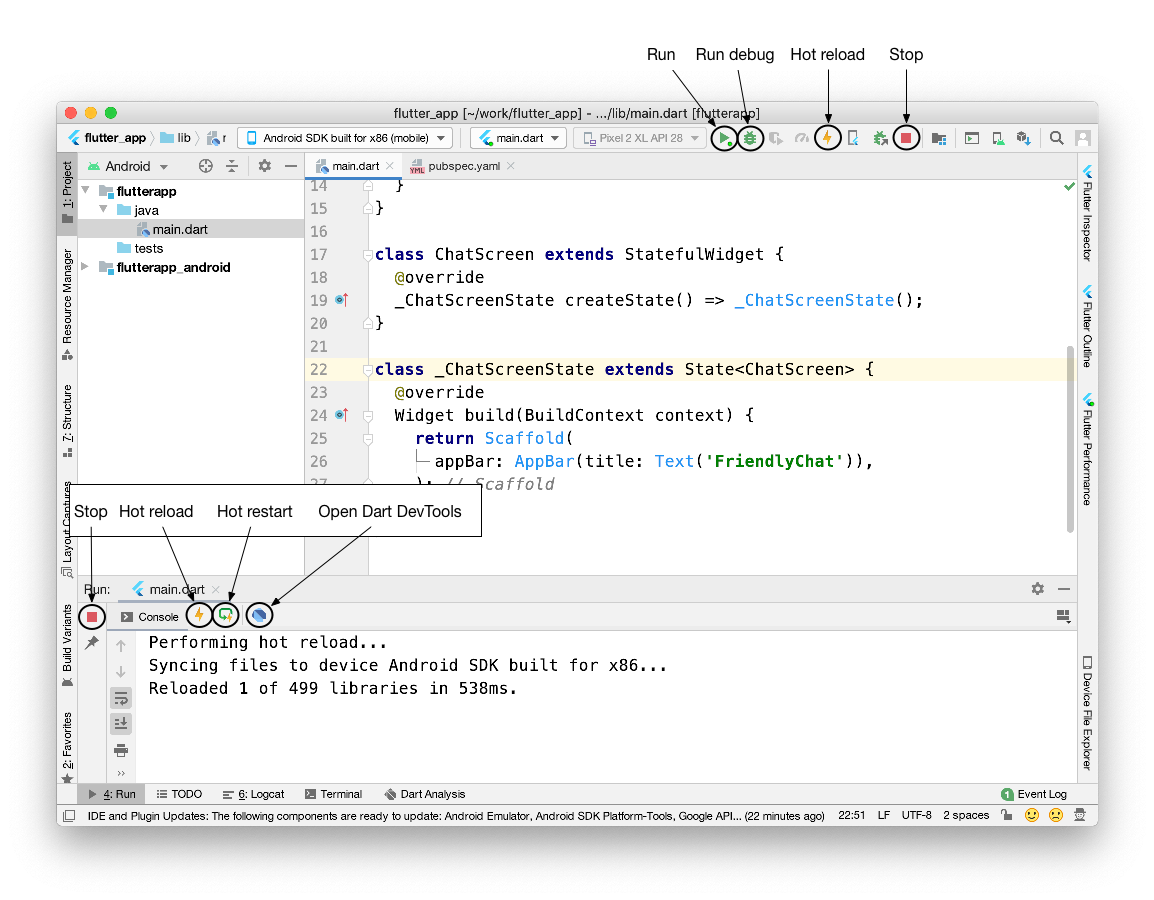 A code change has a visible effect only if the modified Dart code is run again after the change. Specifically, a hot reload causes all the existing widgets to rebuild. Only code involved in the rebuilding of the widgets is automatically re-executed. The main() and initState() functions, for example, are not run again.

The next sections describe specific scenarios that involve hot reload. In some cases, small changes to the Dart code enable you to continue using hot reload for your app. In other cases, a hot restart, or a full restart is needed.

An app is killed

Hot reload can break when the app is killed. For example, if the app was in the background for too long.

When a code change introduces a compilation error, hot reload generates an error message similar to:

In this situation, simply correct the errors on the specified lines of Dart code to keep using hot reload.

Hot reload won’t apply changes made to a builder of a CupertinoTabView. For more information, see Issue 43574.

If you’ve changed native code (such as Kotlin, Java, Swift, or Objective-C), you must perform a full restart (stop and restart the app) to see the changes take effect.

Flutter’s stateful hot reload preserves the state of your app. This approach enables you to view the effect of the most recent change only, without throwing away the current state. For example, if your app requires a user to log in, you can modify and hot reload a page several levels down in the navigation hierarchy, without re-entering your login credentials. State is kept, which is usually the desired behavior.

If code changes affect the state of your app (or its dependencies), the data your app has to work with might not be fully consistent with the data it would have if it executed from scratch. The result might be different behavior after a hot reload versus a hot restart.

Recent code change is included but app state is excluded

If you change initializers of global variables and static fields, a hot restart or restart the state where the initializers are hold is necessary to see the changes. For example, consider the following code:

After running the app, you make the following change:

You hot reload, but the change is not reflected.

Conversely, in the following example:

Running the app for the first time prints 1 and 1. Then, you make the following change:

While changes to const field values are always hot reloaded, the static field initializer is not rerun. Conceptually, const fields are treated like aliases instead of state.

The Dart VM detects initializer changes and flags when a set of changes needs a hot restart to take effect. The flagging mechanism is triggered for most of the initialization work in the above example, but not for cases like the following:

To update foo and view the change after hot reload, consider redefining the field as const or using a getter to return the value, rather than using final. For example, either of the following solutions work:

For more information, read about the differences between the const and final keywords in Dart.

Even when a hot reload operation appears successful and generates no exceptions, some code changes might not be visible in the refreshed UI. This behavior is common after changes to the app’s main() or initState() methods.

For example, consider the following code:

After running this app, change the code as follows:

With a hot restart, the program starts from the beginning, executes the new version of main(), and builds a widget tree that displays the text Hello.

However, if you hot reload the app after this change, main() and initState() are not re-executed, and the widget tree is rebuilt with the unchanged instance of MyApp as the root widget. This results in no visible change after hot reload.

When hot reload is invoked, the host machine looks at the edited code since the last compilation. The following libraries are recompiled:

The source code from those libraries is compiled into kernel files and sent to the mobile device’s Dart VM.

The Dart VM re-loads all libraries from the new kernel file. So far no code is re-executed.

The hot reload mechanism then causes the Flutter framework to trigger a rebuild/re-layout/repaint of all existing widgets and render objects.